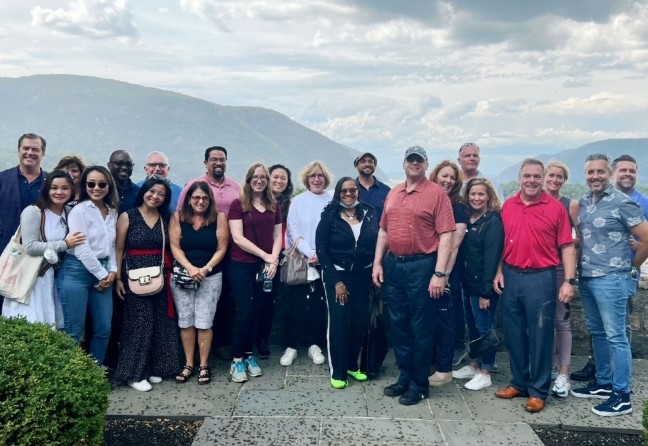 At this year’s Penn Chief Learning Officer annual retreat, 30 students and alumni went to America’s preeminent military academy to catch up with their classmates. Along the way, they tried to catch their breath.

Pushups. Pullups. Sprints. Rows. The morning started with military trainings and relay races. Then came a scavenger hunt in a nearby town, while a battle captain stayed behind at headquarters to announce enemy fire, communication blackouts, and the gain and loss of territory.

“We did outings and excursions in the CLO program, and this was a way to recapture that fun,” said Adam Payne, a 2018 alum and the current president of the CLO Alumni Council. “Like a lot of alumni groups, our big thing is to continue the relationships and continue the magic we experienced in the program.”

Payne thinks that face-to-face contact is important to keep that magic alive. For most of the attendees, this was the first time they reconnected in person after two years on Zoom.

Another highlight, said Payne, was hearing from COL Lee Van Arsdale, who was awarded the Silver Star and the Purple Heart for his role in the operation that became known as “Black Hawk Down.” His advice to the Penn GSE alumni was to “be the calm in the chaos,” a military mantra that translates to all forms of leadership.

“People walked away with a sense of history and with ways to apply that tradition and style of leadership,” said Payne, an assistant professor of psychology at the Wentworth Institute of Technology in Boston.

Inspiration for the military venue came from Daniel Rice, a current CLO student who attended West Point for his B.S. in 1988. His agency, Thayer Leadership, facilitated the retreat planning process. (He had to leave the retreat early to do an interview with CNN.)

California-based Megan Yoo Schneider, who works in client account leadership at Accenture, started the CLO program in 2021. She trekked to West Point for a weekend she won’t soon forget.

“We saw parallels between the U.S. military and what we can do in our respective spaces, whether it be nonprofit, corporate, or government,” Schneider said, citing a talk by COL Donna Brazil, a retired military leader with three decades of experience.

As for her experience in the CLO program, Schneider describes it as “transformational.”

“You have a community of thought leaders and change-makers that you can work with, draw from, and bounce ideas off of,” she said. “You meet so many people from so many backgrounds and walks of life. We all say that when we meet our CLO colleagues, we know we’ve found our tribe.”