Since 2015, Thayer Leadership has partnered with Nasdaq Marketsite to co-host an annual Veteran’s Day Symposium in New York City. Thayer hosted the 8th Annual Veterans Day event virtually in 2020, bringing together a robust group of military and corporate leaders to discuss lessons in leadership and diversity in times of uncertainty. 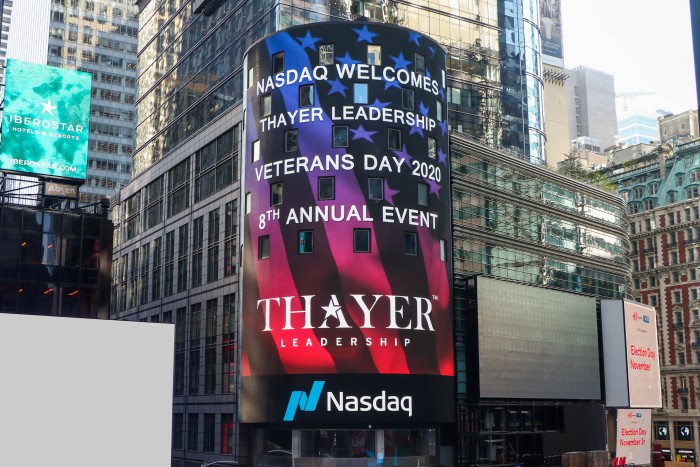 The 60th Superintendent of the United States Military Academy (USMA) at West Point, Lieutenant General Darryl A. Williams set the tone of the day by welcoming everyone and touching on the importance of Veterans Day. A conversation with Mike Krzyzewski (aka: Coach K), Men's Basketball Head Coach for Duke University, followed, where he shared how to lead and motivate teams through challenges using his military training at USMA and time as Head Coach of USA Men's Basketball Team and at Duke University. Major General (Ret.) Linda Singh, Ph.D., CEO Kaleidoscope Affect LLC and Leader-in-Residence, Towson University, Ken Lamneck, President and CEO, Insight, and Dan Streetman, CEO, TIBCO Software, Inc., joined us for a panel discussion centered around Veteran Support Initiatives. The event concluded with a fireside chat between Thayer President, Dan Rice, and Thayer faculty, Brigadier General (Ret.) Bernie Banks, Ph.D., focused on diversity from the military to the boardroom.

In 2019, Thayer founder Bill Murdy moderated a panel with United States Military Academy Superintendent, LTG Darryl Williams and United States Naval Academy Superintendent VADM Sean Buck. The trio discussed the challenges and opportunities at our military academies, their personal leadership advice, and how corporations can develop future leaders by bridging the gap between the military and civilian sectors. The panel concluded with a fun fast-round of questions about the upcoming Army-Navy football game. The event continued with the U.S. Secretary of Defense Mark Esper ringing the closing bell and remarking on the significance of Veterans Day. The Superintendents joined Esper at the podium and presented him with a signed Army-Navy football.

“It is so important to honor our veterans, but it is also imperative to hire, support, and train veterans," stated Dan Rice, President of Thayer Leadership. “There are so many issues related to veterans' employment, and companies that have embraced veterans' hiring have found that they are better companies overall.”

In 2017, the roundtable discussion on veterans hiring was led by Hiring Our Heroes President, Eric Eversole, with robust discussion about the state of the veterans hiring environment and unique challenges facing veterans’ families. The Nasdaq Closing Bell was subsequently rung with 50 Chairmen, CEOs, and Presidents who raised their hands pledging to hire more veterans for their companies during the next year.

In 2016, Thayer identified categories of support that companies can provide to veterans and their families, encouraging all companies to adopt or enhance their Veteran’s Initiatives and to share them using #vetsdayceochallenge. In partnership with the Association for Talent Development, Thayer also published a special supplement of TD Magazine, sharing best practices from organizations that are trailblazers in recruiting, developing, and supporting veterans and active duty military.

Stay tuned for information about the 9th annual Veterans Day Event at Nasdaq Marketsite in November 2021.