The Invasion of Normandy: A Seminal Event in World History

June 6, 2022 marked the 78th Anniversary of one of the most complex and daring operations in the history of warfare. General Dwight D. Eisenhower’s ‘Great Crusade’ against Hitler’s ‘Fortress Europe’ had been years in the making; combining the land, sea, and air assets of the United States, United Kingdom, and Canada. Three years ago, our team at Thayer Leadership hosted a multi-day client program in Normandy. It was an incredibly humbling experience to stand on the D-Day landing beaches in Normandy, which were peaceful and serene 75 years later. We were able to walk in the footsteps of those who sacrificed so much for the vision of a free world, and learn their inspiring lessons of fortitude, perseverance, and leadership.

As a leader, how would you have planned and executed your vision to ensure a successful outcome at D-Day? The stakes were high – putting a stop to the devastating power of Hitler’s Reich. On the evening of June 5, 1944, Eisenhower broadcast his Commander’s Intent and blessings for the successful “destruction of the German war machine, the elimination of Nazi tyranny over the oppressed peoples of Europe, and security for ourselves in a free world.” This message was heard by every single Soldier, Sailor, and Airman who was about to embark on this crucial task against a “well trained, well equipped and battle-hardened” enemy. It inspired and gave confidence to the individual, the team, and the entire organization that they would “accept nothing less than full Victory.” Every single individual heard and internalized Eisenhower’s powerful vision before facing the daunting objective the next day. 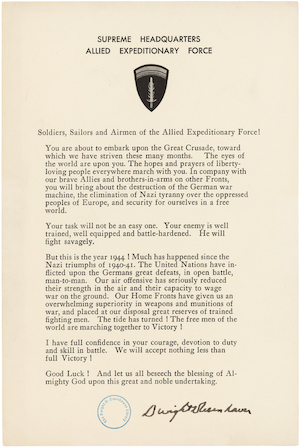 The multi-national team that Eisenhower built epitomized the value of trust in an organization. On the night of June 5, 1944 and into the morning of the 6th, over 9,000 aircraft and over 5,000 ships launched from fields and ports throughout the United Kingdom with the single objective of gaining a foothold on the Normandy coastline. Paratroopers jumped into a dark night over Nazi-occupied France, completely trusting that the Allied invasion force was on the way. Higgins boats, or landing crafts, churned towards the beaches of Northern France as Allied fighters and battleship shells flew by overhead. Army Rangers scaled the steep bluffs at Pointe du Hoc, and Soldiers struggled ashore against a hail of machine gun fire, each knowing that they had been entrusted to do their part towards the single objective.

Eisenhower’s strategic vision as the leader of D-Day was staggering not just in scale, but in detail and depth as well. The Mulberry ports, temporary portable piers specially built to support the logistics of the invasion, would turn the Nazi held beaches of Normandy into the world’s busiest harbor. Prepared to exploit success, the initial force of 20,000 paratroopers and landing of 5 divisions was followed by a force of 25 more divisions from 5 countries. It was a complex strategy with multi-national components, conducted in a high risk environment with incomplete information.

Of the incredible examples of leadership, courage, and determination that the 78thAnniversary of the D-Day landings gives us, one quiet moment of reflection is often overlooked. On the evening of June 5, 1944, having given the final and definitive order to launch, General Eisenhower jotted down a note to carry in his pocket the following morning. In the event that the combined efforts the Allies had prepared for so long, and the bravery and sacrifice of so many had come to failure, Eisenhower had a message to address the outcome. The note read, “The troops, the air and the navy did all that bravery and devotion to duty could do. If any blame or fault attaches to the attempt, it is mine alone.”

We take a pause this month to remember the bravery and devotion of so many who ultimately carried the day on June 6, 1944. But we also take a moment to reflect on the quiet example of a leader who had a lofty vision, built a magnificent team, and owned his decisions. The invasion of Normandy was a seminal event in world history. Those Allied soldiers who bravely served continue to inspire generations of freedom fighting Soldiers to follow their leadership and example. The strategy, tactics, leadership and bravery of all of those involved in this epic battle will be forever studied in military art and history. We will continue to travel to a now peaceful and beautiful Normandy to honor and learn from their bravery. 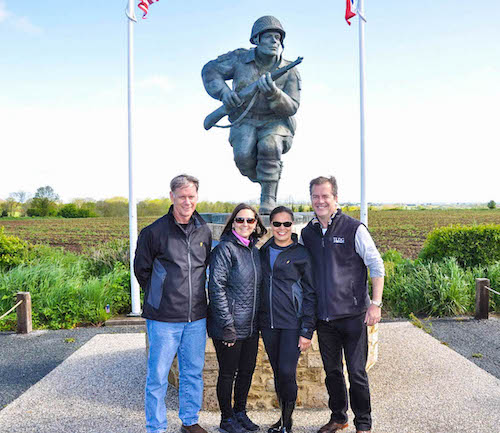