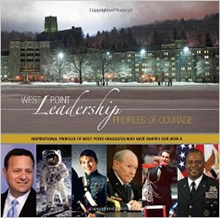 This award-winning leadership book was co-authored by Daniel E. Rice, one of the Co-Founders of TLDG. This coffee table book is the perfect gift book for executives attending Thayer Leader Development Group training at West Point to bring home with them. This inspirational leadership book profiles 200 West Point graduates who have displayed leadership that changed our world in the military, government, business, athletics, NASA, politics, and other areas. In 2014 the book was awarded three Silver Benjamin Franklin book awards for Best Gift Book, Best Biography and Best First Book by the Independent Book Publishers Association (IBPA). The book was presented to the President of the United States by the West Point Class of 2014 and signed by all the class leaders at the graduation ceremonies at Michie Stadium.

The book contains 200 biographies and over 1,600 unique photos including many of the beautiful locations on West Point that the TLDG attendee will be visiting including the Historic Thayer Hotel, Zulu Lounge, MacArthur’s Restaurant, Patton’s Tavern, the West Point Visitors Center, the Cadet Chapel, West Point Cemetery, Trophy Point and Battle Monument to name a few.

Each biography is written to educate and inspire. The book is in part a leadership book and in part a history book. In addition to the historical West Point graduates such as Grant, Lee, Pershing, MacArthur, Stilwell, Eisenhower, Patton, Westmoreland, Abrams, Schwarzkopf, and others, the book also contains over 100 biographies of living graduates. After extensive interviews over a three-year period, the book includes the authorized biographies of living Generals, Astronauts, Medal of Honor Recipients, CEOs, Governors, Senators, Members of Congress, and other great leaders.

"Decision making is not what you decide, it is how you decide."
Colonel Heidi Graham, Ed.D.,(USA, Retired, George Washington University)
More +