The Importance of Moral Courage

The Importance of Moral Courage

This is an excerpt from Ch 14, “Trust: The Key to Combat Leadership” by Colonel (Retired) Patrick Sweeney, Ph.D., from the book “Leadership Lessons from West Point”.  The chapter delves into the top ten attributes of a leader who can be trusted in combat as determined by Sweeney’s research on trust and leadership in an actual combat environment during Operation Iraqi Freedom in May 2003.  Those attributes, in order of importance, are: competent, loyal, honesty/good integrity, leads by example, self-control (stress management), confident, courageous (physical and moral), shares information, personal connection with subordinates and strong sense of duty.

The second dimension of leader courage deals with leaders’ moral strength to do the right thing in all situations.  Moral courage entails a leader’s strength of character to be willing to incur risk in order to act according to his or her values and beliefs and stand up to authority to protect his or her soldiers’ welfare or defend his or her decisions.  Thus, moral courage enables leaders to live with integrity, act to uphold the loyalty to their subordinates, and execute their duties with confidence.  Subordinates can trust leaders who have the courage to act in accordance with their values because they know the directives they issue will be honest and based on values.  Subordinates will not depend on or trust a leader who possesses good job knowledge, has a good set of values and beliefs, and has loyalty to subordinates but lacks the moral courage to put these skills, values, and beliefs into action.  Therefore, a leader’s moral courage provides the force of will to do what is right regardless of the situation and the costs the leader must incur.  In combat, this is critical because leaders’ moral courage and integrity define the moral and ethical boundaries that subordinates must operate within.

Furthermore, soldiers’ responses indicated they would trust combat leaders who were not afraid to take a stand for what they believed in, the decisions they made, or what is the proper way to conduct business.  Leaders must have the moral courage to handle the consequences of taking a stand with the chain of command to fight for what they believe is right.  The following statements illustrate qualities of moral courage that lead to the development of trust:

“[I place a high value on a leader’s] strength when it comes to standing up to the company commander, so that fire-support team members were used properly and not as machine gunners.” – Staff sergeant, infantry company fire support noncommissioned office, Qayyarah West Airbase, northern Iraq

“Courage [is important because] a leader must be able to take risks and not back down from confrontation.” – Private first class, infantry company forward observer radio operator, Qayyarah West Airbase, northern Iraq

Moral courage is equally important to leadership in business, nonprofit, political, or any other type of organization.  Group members always expect their leaders to have the moral courage to act in accordance with their own and the organization’s values.  Thus, leaders’ moral courage provides group members with a sense of confidence that leaders will behave in a moral and ethical manner and take action to promote the best interests of the organization and its members.  This confidence that leaders have the strength to act morally and ethically leads to the development of trust, which increases group members’ willingness to follow.

Enron’s, Tyco’s, and Adelphi’s senior business leaders lacked the moral courage to act in accordance with their own and their organization’s values.  The consequences of this leadership failure were devastating to the companies, the employees, retirees, and shareholders.  Employees lost their jobs, retirees lost their pensions and sense of security, shareholders lost their equity, and the public lost trust in the companies.  Whether these senior leaders actively participated in the fraud or tolerated it by not coming forward, they all lacked moral courage to do the right thing.  Thus, the agency that comes with moral courage helps ensure group members that leaders do the right thing by the organization and all people associated with it. 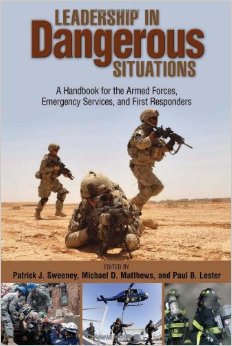 ExpertiseLeader and leadership development, trust, building and leading high performing teams, leading organizational change, leadership in dangerous contexts, and behavioral ethics  ExperienceDr. Patrick Sweeney is an experienced senior leader-practitioner and scholar whose research interests focus on character and identity development, trust, and building teams. He is a Professor of the... Read More +

"Your legacy is the people you develop. Have you developed the future?"
Colonel Patrick Sweeney, Ph.D.
More +

"Your legacy is the people you develop. Have you developed the future?"
The Importance of Moral Courage