Leadership: The Power of Dreaming 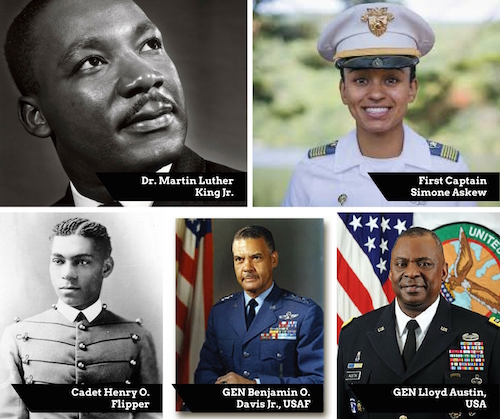 On 28 August 1963, Martin Luther King, Jr. gave his legendary “I Have a Dream” speech. Those were troubled times in America, times that make our current challenges somehow seem less challenging. The power of dreaming, of creating a vision for the future, is a trait great leaders possess. And as we look back on the past century, we often forget how far we have come as a nation and how progress is the result of so many brave individuals, brave leaders, who possessed not only the power to dream, but to achieve those dreams, that have helped us continue to advance as a nation.

In 1963, when MLK gave his speech, times were tough, but in perspective, they had been much worse. 100 years before MLK’s 1963 speech, for example, in 1863, in Thomasville, Georgia, an eight-year-old black boy named Henry O. Flipper had dreams. But his dreams were likely much more modest. He likely dreamt of gaining his freedom from slavery, which he would gain two years later when the Union defeated the Confederacy and he broke the shackles of slavery at age 10. Eight years later Henry O. Flipper would defy all odds, enter West Point, and graduate as the first African-American graduate in 1877. The former slave became a United States Army officer, and went on to fight in the Indian Wars.

Prior to his death at age 74, Henry O. Flipper would see another young African-American graduate West Point, Benjamin O. Davis, Jr.  Davis graduated from West Point in 1936 and looked at Henry O. Flipper, the first African-American graduate of West Point, as his hero. When he was commissioned in the Army in 1936, Davis became only the second African-American Army officer on active duty, in the entire U.S. Army, the other coincidentally bore his name, for it was his father: Benjamin O. Davis, Sr.  Benjamin O. Davis, Jr. had great dreams and vision. Davis would go on to earn his flight wings, and founded and commanded the Tuskegee Airmen, the First All-Black fighter squadron in World War II, and become the first African-American General Officer in the newly formed United States Air Force. Under Davis’ leadership, the incredible success of the Tuskegee Airmen was one factor that helped convince President Truman to end segregation in the military and, in 1948, our military integrated blacks into all units. Our military led our nation, integrating African-Americans 16 years prior to the Civil Rights Act which ended segregation.

At the time of his graduation from West Point, Benjamin O. Davis, Jr was likely an inspiration for a young seven-year-old boy named Martin Luther King, Jr. in Atlanta, Georgia. Thirty-seven years later, Martin Luther King, Jr. would give his famous “I Have a Dream” speech. At that time of his speech in 1963, the south was still segregated (except on military bases). Blacks had separate toilets and could not drink from “Whites Only” public drinking fountains. Again, in Thomasville, Georgia, deep in the segregated south in the same town where Henry O. Flipper had been raised, another ten-year-old boy named Lloyd Austin had a dream of going to West Point, but at that time he could not even use the same toilets or drinking fountain as whites, simply due to the color of his skin. The year after MLK's "I Have a Dream" speech, in 1964, Lloyd and all African-Americans, were finally given equal rights, when segregation was ended with the Civil Rights Act of 1964. Lloyd Austin would enter West Point in 1971, graduate in 1975, and go on to become one of the most highly decorated Generals, and the First African-American to achieve many titles including First African-American to command an entire theater of war (Iraq).

Jim Nicholson grew up poor in Iowa and his mother would say, “If you study hard, work hard and pray hard, you can do anything in this country.” Jim would graduate West Point in 1961 and have a spectacular career, becoming the Ambassador to the Holy See (Vatican) and the Secretary of Veterans Affairs. His mother’s words ring true today as they did when he was boy.

Let’s hope every little boy and girl in America gets to learn the story of a young girl from Fairfax Virginia named Simone Askew, who had a dream and now walks in the shadows of Pershing, MacArthur, Westmoreland, Brooks, Baker…as well as walking in the footsteps of the boy who was born a slave and grew up to graduate from West Point, Henry O. Flipper.

According to Gallup polls, our military is the most respected institution in the United States, far ahead of the Congress, Presidency, large and small business, and the church. Our All-Volunteer military is one of the greatest meritocracies in our nation. Regardless of gender, race, religion, wealth, social status…. every man or woman joining our All-Volunteer military has the same ability to succeed as anyone else. If you can dream it, in our military, you can achieve it.

Congratulations to Cadet Simone Askew for achieving at least one of her dreams and hopefully many more.