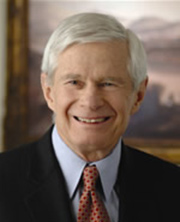 
Fred Malek was Founder and Chairman of Thayer Lodging Group, a private equity firm that has acquired over $3 billion of hotel assets and has consistently earned top returns for investors. Thayer recently acquired the largest independent hotel management company in the world, Interstate Hotels, and in addition to its U.S. interests has three hotel related ventures in China. Mr. Malek was also the Founder and Chairman of Thayer Capital Partners, a Washington D.C. based corporate buy out firm.

In his earlier investment activities Mr. Malek led the acquisition of the Ritz Carlton Hotel Company with Marriott International as a major equity partner, was one of three leaders in the acquisition of Northwest Airlines, led the acquisition of CB Richard Ellis (formerly Coldwell Banker), and was a partner with former President George W. Bush in owning the Texas Rangers Baseball Club. Previously in his business career, Mr. Malek was President and CEO of Marriott Hotels, President and CEO of Northwest Airlines, and Co-Chairman of CB Richard Ellis. During his eight year tenure as president of Marriott Hotels profits quintupled and the stock increased eight fold.

In addition to his business career, Mr. Malek served as an advisor to four U.S. Presidents. He entered government as Deputy Undersecretary of the Department of Health, Education and Welfare. He later became Special Assistant to the President of the United States, and Deputy Director of the U.S. Office of Management and Budget under Presidents Nixon and Ford. Mr. Malek advised President Reagan as a member of the executive committee of the President’s Council on Cost Control, as a member of the President’s Commission on Private Sector Initiatives, and as a member of the President’s Council on Physical Fitness and Sports. He served President Bush as Director of the 1988 Republican Convention, as Director of the 1990 Economic Summit of Industrialized Nations, with the lifetime rank of Ambassador, and as Campaign Manager for President Bush during 1992. Mr. Malek served as National Finance Chairman for the 2008 McCain Presidential Campaign and in 2008 was appointed by President George W. Bush to the Board of Visitors of the U.S. Military Academy at West Point.

Mr. Malek was an active philanthropist serving on the Board of the Aspen Institute where he is Chairman of the Finance Committee and member of the Executive Committee, on the Board and Executive Committee of the American-Israel Friendship League and on the Board of the George H.W. Bush Library Foundation. His philanthropy includes contributions for building the Malek Tennis Center at West Point; the O’Meara, Malek, Dawkins Class of 1959 Strength and Development Center at West Point; the Resnick-Malek Health Center in Aspen; and the Marlene and Fred Malek School of Health Professions at Marymount University. He also served as one of the two Co-Chairman leading West Points largest ever capital campaign.

Mr. Malek received a number of awards in his career including being named one of the five most outstanding graduates of the century from Morton High School in Cicero, Illinois, the Woodrow Wilson Award for Corporate Citizenship, the Harvard Business School’s Business Statesman Award, the American Friends of the Czech Republic’s Civil Society Vision Award, the Boy Scouts of America’s Citizen of the Year Award and the sister Majella Berg award, Marymount University’s highest honor. He was recently inducted into the Horatio Alger Society. He appeared frequently in television news shows including as guest host of CNBC’s Squawk Box, and numerous appearances on Fox News, Meet the Press, Fox Sunday and Face the Nation.

Mr. Malek was a graduate of West Point and the Harvard Business School, and was an Army Airborne Ranger serving with a Special Forces (Green Beret) team in Vietnam. He is survived by his wife, two children and five grandchildren. Besides family, his passions included biking, hiking, and cross country skiing.