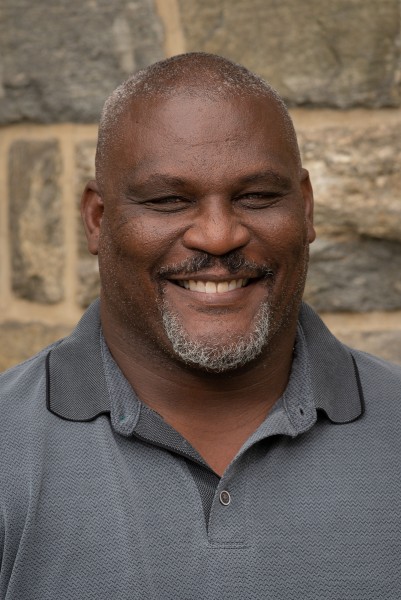 Greg Gadson has experienced the very worst of war, but he has not been defeated by unfortunate circumstances; rather his life is a portrait of courage in the face of great adversity. A standout football player at Indian River High school and West Point, this decorated U.S. Army Commander knows well the role that hard work and determination can play in overcoming life’s challenges.

A highly decorated soldier, Gadson was Commander of the 2nd Battalion, 32 Field Artillery in Iraq when on the evening of May 7, 2007, he was severely wounded by an IED resulting in the loss of both legs above the knee and a severely damaged right arm and hand. Refusing to be defined by the proverbial “hail of bullets,” he has since drawn upon the lessons of Pride, Poise, and Team learned as a West Point linebacker and applied them to his life, his career and his family. Despite Gadson’s greatest challenge, he remained on active duty service in the military until 2014 and continues to inspire many with his message of courage, perseverance, determination, and teamwork.

While his football playing days may have ended, he continues to influence the sport. In 2007, New York Giants Head Coach Tom Coughlin asked Gadson to meet with the struggling team. Gadson talked with the team about service, duty, perseverance, and adversity. Inspired by his example and his stirring advice to fight for every inch, every yard, Giants players and coaches invited him to watch from the team bench during their remarkable playoff run and then name him Honorary Co-Captain at the NFC championship game at Lambeau Field in Green Bay, Wisconsin. Gadson has a special understanding of the critical role of teamwork and camaraderie. As an Army Commander, he was responsible for the lives of his soldiers, and in the last 15 minutes of the crucial “golden hour’ after his injury, those soldiers saved his life.

Gadson was commissioned as a 2nd Lieutenant of Field Artillery in 1989 from the U.S. Military Academy at West Point. He has served in every major conflict of the past two decades, including Operations Desert Shield/Storm (Kuwait), Operations Joint Forge (Bosnia-Herzegovina), Operation Enduring Freedom (Afghanistan) and Operation Iraqi Freedom (Iraq). His awards include the Bronze Star (3), Purple Heart, Meritorious Service Medal and the Army Commendation Medal. He is a graduate of Command and General Staff College at Fort Leavenworth, Kansas, and holds a Master’s Degree in Information Systems from Webster University and a Master’s Degree in Policy Management from Georgetown University.