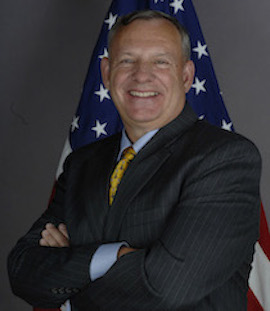 Experience
Ambassador Dailey’s experiences span 36 years of Army life and an additional two years as the Coordinator for Counterterror in the State Department.  As a military dependent and soldier, he has served in Asia, Europe, Middle East, Africa, South America and North America. His early military experiences were as both an infantryman and helicopter pilot. In later years, he transitioned to special operations, where he commanded two special operations aviation battalions - taking one to combat and the other on classified worldwide missions. As a flag officer, he was selected to be the Assistant Division Commander of the 101stAirborne Division (Air Assault) and later Chief of Staff of US Special Operations Command located in Mac Dill AFB, Tampa, FL. Later he was selected as Commander of the world’s premier special operations headquarters, Joint Special Operations Command (JSOC). While he commanded this select unit, he took it to the Balkans and led the Nation’s selected early entry missions post 9/11 into Afghanistan and Iraq. Culmination of his government service was being selected by Secretary Rice, confirmed by the US Senate, and appointed by President Bush as the Ambassador at Large for Counterterrorism at the US State Department.

Today, Ambassador Dailey is a private consultant with both domestic and international clients covering companies as varied as a sedate private equity company to as violent as international security in combat zones. He serves as the Distinguished Chair of the Combatting Terrorism Center at West Point, New York. His focus remains leadership as an Advisor and Director mentoring in over 15 domestic or international focused companies.

Scholarly Work/Publications/Awards
Ambassador Dailey’s Counterterror leadership experiences have been shared on both domestic and international levels. Panel discussion and presentations have occurred at renowned think tanks including the Center for Strategic and International Studies and the Center for a New American Strategy. Academically he has participated in events at Georgetown University, George Washington University, and as a Board member for University of Pennsylvania Law School. Internationally, he has presented in London, Brussels, Paris, and Rome for private and US government purposes.  He has been a Leadership Mentor for the U.S. Department of State, the U.S. Special Operations Command and U.S. Army for future leaders.

Recognitions
Briefed the President and Vice President, Secretaries of Defense and State of the U.S.
Recognized by his Peers as the youngest Distinguished Graduate of West Point
Inducted into the US Army Aviation Hall of Fame and Ranger Hall of Fame
Multiple awards and decorations for excellence in combat, peacetime and classified missions

Personal
Happily married 37 years with five children. All contributed to U.S. National Security, but one. He is doing comedy in Los Angeles.

Balancing the Science and Art of Leadership