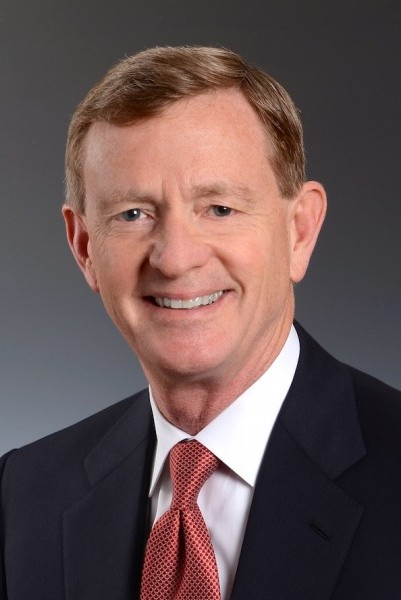 
Timothy Tyson is a proud West Point graduate and a global leader in the pharmaceutical industry. In his 30-plus year career, he has negotiated complex multi-billion dollar mergers and acquisitions, led major turnarounds which have fueled growth and value and, most significantly, has been instrumental in bringing more than 50 lifesaving and life improving medicines to the market.

Tim was born in 1952 in Hornell, New York, and moved with his family to the Ithaca area when he was 14. He attended Dryden High School and graduated third in his class. In addition to excelling academically, Tim lettered in football, basketball and baseball. During his senior year, Tim was a leader on the football and baseball teams that won league championships for Dryden High School. He participated in student government, community volunteerism, choir and theater and played lead guitar for a high school rock band from Hornell called ‘The Axis Power.’

After receiving a congressional appointment in 1970, Tim entered West Point with the Class of 1974. As a cadet Tim played lacrosse, was a member of the West Point Glee Club and Protestant Chapel Choir, served as a sports editor for the Howitzer and was Regimental Investigating Officer on the Honor Committee. The Class of 1974 graduated after the withdrawal of ground forces from Viet Nam and the implementation of the All Volunteer Army. Tim was commissioned in the Military Police Corps and assigned to the 111th Military Police Company, at Ft. McClellan, Alabama. He served in many positions, in the 111th, including Military Police Investigations and Executive Officer. He was well respected by his commanding officers, peers and troops and always pushed himself to overachieve. While on active duty, Tim attended classes four evenings a week, earning a Master of Public Administration in 1976 and a Master of Business Administration in 1979 from Jacksonville State University. In 2007, he was recipient of JSU’s Alumnus of the Year award. Captain Tyson resigned from full-time military service in 1979 and remained in the Army Reserves for the next fourteen years, retiring as a Major.

Tim's first civilian job after leaving the Army was with Proctor & Gamble as a manufacturing manager. From 1980-1988 he held several executive positions with Bristol-Myers in Syracuse, New York and Wallingford, Connecticut.

Tim was hired by Glaxo, Inc. as Director of Engineering in 1988. He successfully led the completion of the construction of a half-billion dollar research and development facility on the campus in Research Triangle Park, North Carolina. Tim ran several divisions for Glaxo, GlaxoWellcome and GlaxoSmithKline and was a member of the Corporate Executive Team reporting to the CEO. Tim served as Vice President of Sales and Marketing for GlaxoWellcome's US operations where he managed a sales force of over 4,000 reps and launched 32 new products, eight of which achieved sales greater than $1 billion each. He led the manufacturing merger between GlaxoWellcome and SmithKlineBeecham. As President of GSK’s Global Manufacturing and Supply division, Tim was responsible for 40,000 employees at 130 manufacturing facilities in 41 countries. He made in person visits to nearly every one of the sites. Tim’s leadership by example inspired the thousands of employees to unprecedented achievements.

From 2002-2008, Tim served as Chief Operating Officer; President & Chief Executive Officer of Valeant Pharmaceuticals International. During this period, sales grew 69% and earnings increased 135%. He led a major restructuring of the company and established a highly effective Research and Development capability which developed a best in class epilepsy compound and a promising pro-drug for hepatitis C, both in Phase III. Valeant was the first pharmaceutical company to implement the Lean Six Sigma process across all disciplines of the company globally.

In 2008 Tim was named Chairman and CEO of Aptuit Inc., a pharmaceutical services company, based in Greenwich,Connecticut. Aptuit was a Scrip Award winner in 2010, for its work partnering on five different development programs with Exelixis. The American Chamber of Commerce in Italy, honored Aptuit with the Transatlantic Award 2010, for its substantial investment in Italy, with the acquisition of GSK’s Research Centre of Verona. In 2009, Aptuit was awarded the CEO Cancer Gold Standard accreditation. In addition to implementing Lean Six Sigma practices at GlaxoSmithKline and Valeant, Tim, also, introduced the process at Aptuit. In 2011, he was recognized by the International Society of Six Sigma Professionals as Leader of the Year and was honored as the third inductee into the iSix Sigma Hall of Fame.

Since his graduation fromWest Point in 1974, Tim has been an ardent supporter of the academy and his fellow graduates. He is a co-founder of Thayer Leadership and an actively involved co-investor in the turnaround and revitalization of the Thayer Hotel at West Point. In 2002, Tim received a Bicentennial Leadership Award from the United States Military Academy at West Point. He is the West Point Association of Graduates’ largest contributor of unrestricted funds and has been inducted into the Omar N. Bradley Society which honors leading financial donors to the Long Grey Line.

Tim has also served on/as a member of:

He and his wife, Amy, were married in 1974 and have a grown son, Matthew; daughter-in-law, Kendra; and two grandchildren, Mira Katherine and Noah Rhys Tyson.