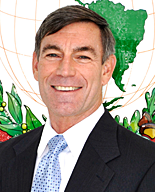 Experience
Dr. Downie has over 35 years of experience leading military, civilian government and private sector organizations.  He was appointed by the U.S. Secretary of Defense to direct the Perry Center for Hemispheric Defense Studies, one of the most respected, security-focused institutions in the Americas.  As Director (SES-3 level), he led courses, seminars and conferences, as well as security dialogues and strategy workshops for ministries of defense and cabinet-level national leaders. During a distinguished military career, he held a wide variety of command and staff positions as an Infantryman and a Foreign Area Officer specializing in Latin America. Dr. Downie served in Germany; Colombia, where he completed the LANCERO (International Ranger) School as the distinguished graduate; U.S. Army South in Panama; the U.S. Southern Command; the U.S. Joint Staff; the Multinational Specialized Unit in Bosnia; and in Mexico as the Defense and Army Attaché. He was also the first commander of the Western Hemisphere Institute for Security Cooperation (WHINSEC) at Ft. Benning, Georgia.

In the private sector, Dr. Downie has served as strategist and business developer for defense and security programs; a commentator and analyst on international affairs for both English and Spanish language media (fluent Spanish) and is a frequent speaker at international conferences. He is also a member of the Graduate Faculty of the Department of Defense and Strategic Studies of Missouri State University’s Washington D.C. Program; and is on the Board of Directors of Westport Construction, in Monrovia, California, as well as the World Hwa Rang Do Association, a non-profit martial art.

Scholarly Work/Publications/Awards
Dr. Downie authored, Learning from Conflict: The U.S. Military in Vietnam, El Salvador and the Drug War, (1998) Greenwood Press, as well as numerous scholarly articles and other publications. He has a variety of U.S. military, as well as foreign awards presented by the governments of Colombia, Peru and Mexico.