Fred Malek – A Leader Among Leaders

On April 4, 2019, Mr. Fred Malek, one of our company founders, was laid to rest in the West Point Cemetery at the U.S. Military Academy (USMA). Mr. Malek was a USMA Class of 1959 graduate, one of the most dedicated supporters of West Point and the military, and an avid enthusiast of biking, hiking, and cross-country skiing. Fred embraced the importance of physical fitness. Just six months prior to his passing, he challenged the founders of Thayer to a chin-up contest. He was extremely proud of the work implementing Thayer Leader Development Group’s mission to bring West Point leadership to the world. He was truly a "Leader of Character," one of the best leaders there ever was.

Fred Malek had a diverse and purposeful life, starting as an Army Airborne Ranger serving with a Special Forces (Green Beret) team in Vietnam after graduating from West Point. He was fueled and guided by principles learned at West Point, always exemplifying the school’s motto "Duty, Honor, Country.” He treated people with kindness and conducted himself with unmatched integrity.

Following graduation from Harvard Business School, Fred started on a successful business career that spanned five decades and afforded him the opportunity to become an active philanthropist and humanitarian. He served as President and CEO of Marriott Hotels, President and CEO of Northwest Airlines, Co-Chairman of CB Richard Ellis, Founder and Chairman of Thayer Lodging Group, and Founder and Chairman of Thayer Capital Partners. Fred also served under or as an advisor to four U.S. Republican Presidents – Nixon, Ford, Reagan and George H. W. Bush. He chaired the Republican Governors Association (RGA) and the RGA's Executive Roundtable, helping to transform the committee into one of the most successful and effective in U.S. politics. He also founded and served as the Chairman of the American Action Network and the American Action Forum. Fred’s non-profit affiliations were numerous and varied, including affiliations with the Woodrow Wilson International Center for Scholars, The Aspen Institute, the American-Israel Friendship League, Ford’s Theater, the Kennedy Center for the Arts, and the George H.W. Bush Library Foundation. Proudly of Czech descent, Fred was also the Chairman of the American Friends of the Czech Republic.

In addition to his business activities, Fred’s dedication to serving his alma mater was unmatched. He served as the Chairman of the Board of Visitors of West Point; underwrote the Malek Tennis Center, the Malek Soccer Stadium at West Point, and the O’Meara, Malek, Dawkins Class of 1959 Strength and Development Center; and led the largest capital campaign in the history of West Point, funding the Frederic Malek West Point Visitors Center. He was named the 2014 Distinguished Graduate, the highest honor bestowed by West Point.

Fred received numerous awards in his lifetime, including being named one of the five most outstanding graduates of the century from Morton High School in Cicero, Illinois, the Woodrow Wilson Award for Corporate Citizenship, the Harvard Business School’s Business Statesman Award, the American Friends of the Czech Republic’s Civil Society Vision Award, the Boy Scouts of America’s Citizen of the Year Award, and the Sister Majella Berg award, Marymount University’s highest honor. He was inducted into the Horatio Alger Society.

Fred never wavered in his belief that our mission was to forge a path for a better America. He will be greatly missed. Rest in peace, Sir. 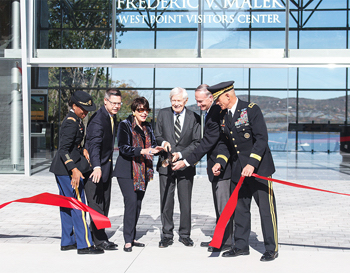 
"As strategic leaders, your life will increasingly be about the WHAT and WHY, not the HOW."
Major General Stephen Layfield,(USA, Retired, USMA 1978)
More +