Seventy-three years ago Allied Forces stormed the beaches at Normandy, and had parachuted the night before all over the Normandy region to disrupt enemy forces from the main invasion.   Americans now learn of this great invasion mostly through Hollywood blockbusters such as “Band of Brothers”, “Saving Private Ryan” and historical great “The Longest Day” and other films.  And while we now know the invasion was an incredible success, which led to the liberation of all of Europe from the Nazis, the future was far from certain that fateful day seventy-three years ago.

In fact, General Dwight D Eisenhower, the leader of the invasion, who would go on to become the 34th President of the United States, had his own private doubts.

While he publicly encouraged the troops with messages that “we will accept nothing less than full victory”, privately, he feared this entire endeavor would fail.  It was incredibly complex, and the enemy certainly had  vote in this election.    In the event of failure, he knew the eyes of the world would be upon one man: himself.   He wrote a note that, if the invasions were successful, would be known only to him.  If the invasions failed, he as a leader had prepared to give the reasons to the American public and the thousands of families who had lost loved ones in the failed invasion:

"Our landings in the Cherbourg-Havre area have failed to gain a satisfactory foothold and I have withdrawn the troops. My decision to attack at this time and place was based upon the best information available. The troops, the air and the Navy did all that Bravery and devotion to duty could do. If any blame or fault attaches to the attempt it is mine alone.”

This note would have been lost to history, but was found in his breast pocket by his aide a few days after the invasion and is now part of the National Archives.   By saving this note, his aide gives us all a great example to follow, usually in far less consequential leadership scenarios.

If the unit fails, it is the responsibility of the leader.  “No excuse”.    As we honor the legacy of D-Day, General Eisenhower’s leadership provides timeless leadership lessons that apply to any endeavor. 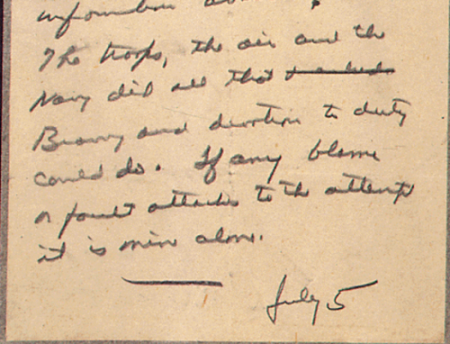 Conversations With Major Dick Winters (Life Lessons From The Commander Of The Band Of Brothers)
Colonel (Ret.) Cole Kingseed